A few weeks ago I was invited to Hollywood, LA by EA for EA Play, there I was able to try out the new Sims Mobile game, give my feedback to the developers and capture some content to share with you all over the next few months, I had a great time meeting other gamers and getting my first chance to play the game so thank you for flying me out for the event EA!

UPDATE: The Sims Mobile is Out Now!

NOTE: the game hasn’t been released worldwide yet, it is currently only available in Brazil so is still very much a working progress which means changes are still being made so the final product may turn out very different from the version I had access to at EA Play.

When I first opened the game I was really impressed with the graphics, I know some of you aren’t keen as it is very different from The Sims Freeplay but I think that is a good thing, they need to look different as they are separate games, if this game looked like The Sims Freeplay players would think it was just a copy and wouldn’t play it. Instead they have gone for a look similar to The Sims 4 which I really like! (not to say I don’t like The Sims Freeplay graphics- they are both beautifully designed!)

I’m not going to go into much detail about create a sim now but I will say the amount of options is incredible! You can edit every facial feature with sliders to make them the exact size and shape you want as well as being able to choose from different body shapes or even giving your sims blue or green skin!

At the moment the tutorial is quite confusing so someone who is completely new to The Sims franchise may get lost, there are goals at the top of the screen but they are very basic and I wasn’t sure when the tutorial was over as there wasn’t a pop up to tell me that I had completed it. I mentioned this to the developers so hopefully they will look into making it more player friendly.

There are loads of different aspects to the game that I am going to briefly explain and give my opinions on them, I will go into more detail on these topics at a later date when the game has been released worldwide. 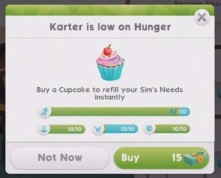 This is a fast paced real time game where most actions take 5 seconds to complete which means there is a lot of tapping! In one way I really like this as you can play for a long period of time before you run out of energy (energy, hunger, hygiene and fun are the 4 needs you have in this game, once you run out of a need you will need to refill using an object which takes a few hours so you can take a break) If you decide to speed up the refilling using simcash instead of waiting then the repetitive tapping can become a little boring.

THE HOUSE AND SIMS

Surprisingly there is only one house in this town and you can have 4 playable sims in that house at one time, you can have other sims such as babies and toddlers but you cannot play as these sims until they age and a playable sim has retired, sims don’t die in this game they just retire and move out

The main point of this game is legacies and generations so your sims complete life goals and the more life goals they complete the better heirloom they will leave behind for the next generation, heirlooms unlock new items and interactions in the game. This does mean that your sims will age automatically every day and at the moment they live for about 12 days in total

your sims have retired!

The developers did mention that they want players to have an emotional attachment with their sims- which I think is a terrible idea! You can’t really build an emotional attachment in 12 days anyway but why would you want to when they are going to move out! However I think sims moving out instead of actually dying works and is needed in this game, as you add new sims in their place and continue where they left off to unlock new items with the heirlooms in buy mode so you can keep upgrading the house and level up to purchase more land expansions. 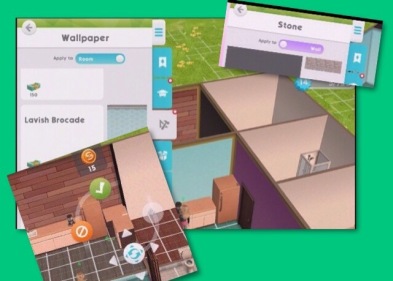 I found buy mode awkward to use, you get a side view when trying to place items from buy mode instead of a birds eye view and when you are changing the wallpaper or flooring you have walls in the way so you can’t see what you are doing! Although I really love that you can click and hold an item to move its position as well as change the colour of an item once you have placed it in the house so as you go through the generations you can refresh the objects without buying new ones and the best bit is that you can place different colours on individual walls instead of being required to have the same design in the whole room. If they fix the issues with buy mode this could be such a great feature! 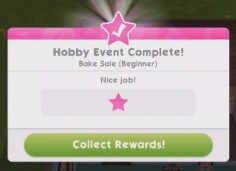 There are loads of events in the game for careers, hobbies, building relationships, earning party points and special events which are all longer events but have 5 second tasks within them, you need to complete the 5 second tasks to fill up the stars, once the stars are full you complete the event and earn event related rewards. The higher the level you are in a career, hobby or friendship the more stars you will need to fill to complete these events. I love the fast pace to these events and that you can go to work as many times as you want or can during a day! 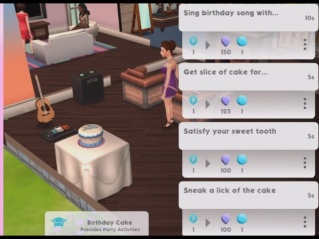 Parties allow you to interact with other players sims, build relationships and even ask their sim to move in if the other player agrees!

Overall I really enjoyed playing The Sims Mobile at EA Play and I cannot wait for the game to be available worldwide! Just to recap I really love the speed of the game and the create a sim options but there are some issues including buy mode as mentioned above but also we really need a camera on the screen and when completing events if you select a 5 second option it zooms right in and then you have to zoom out again when the task is complete to pick the next one which is quite annoying.

UPDATE: The Sims Mobile is Out Now!

NOTE: this content was captured at EA Play so features will change between now and when the game is officially released.

Check out my video on this topic featuring clips of the game here:

There is so much more I’d like to say right now but I’m not allowed to until a later date so keep checking back for more news in the coming months!

Find the game confusing? Check out my FAQs here

25 thoughts on “The Sims Mobile- My Opinion”